If you are looking for the outline on terrorism topic for writing your essay on the same topic then here we are updating you with Terrorism English Essay Outline for CSS, PCS, NTS Tests Preparation so that you can easily prepare an informative and to the point Essay in English on the topic of Terrorism in Pakistan. 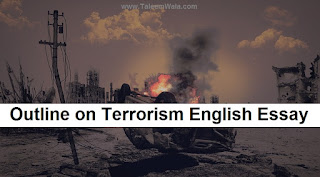 Read through the outline of English Essay on Terrorism and prepare your essay, you can also ask your teachers to read this outline and confirm it so that you will not get in trouble:
Angles/Aspects:
a) Fact or fiction?
b) Threat not only for the west but also for the Muslims?
c) Ploy of west to crush Muslims?
1. What is terrorism?
2. Is it real or so called term?
3. In modern of the world when did terrorism surface?
4. Is the terrorism a political battle or a religious battle?
5. Is the terrorism a war against the injustices of powerful, superpowers, usurpers?
6. Is the terrorism an attempt to establish the ascendancy of a particular group or class?
7. Is the terrorism a start of crusades?
8. Is the terrorism and attempt by some hardcore Islamists groups to resist the centuries old occupation of the west on Islamic territories?
9. Do the terrorist draw their agenda of resistance from the cruelties of the west or from Islam?
10. Will they resort to terrorism even if west stops supporting Israel or India?
11. Will terrorism continue even if west stops exploiting the resources of Muslims?
12. Will the terrorism continue even if west shuns biased policies against Muslim state? Its double policy with regard to democracy, human rights violation, atomic energy etc
13. Genesis of so called terrorist or terrorist groups
14. Were this group really motivated for the cause of Islam or west was behind the creation of these groups?
15. Did these groups get separated from the agenda of world powers and pursue their own agenda separately?
16. Though the terrorist organizations have two agendas
-The destruction and defeat of America
-The establishment of Muslim or Islamic state.
17. Are all the terrorist organizations linked with each other?
18. Do they share agenda with each other?
19. To what extent they share common agenda and where they get separated.
20. Do different agencies control different terrorist groups and through different and through different ways influence terrorist groups to achieve their specific goals?
21. is the terrorism
22. Has the terrorism any link with Clash of Civilization?
23. Is the terrorism linked with the faulty policies of America, Pakistan, and Afghanistan in the wake of Russian debacle?
24. has the terrorism any linkage with Great Game?
25. Is the terrorism a ploy of western countries to crush Muslim countries especially Pakistan?
26. Why Pakistan to be crushed in the pretext of terrorism
A. Is it linked with us policies about India and china?
27. Are all sort of terrorism linked with us relation to remain a superpower for centuries
28. Is there no other way to remain in the cradle of power except in the name of terrorism?
29. War on terrorism in which context and for whom is fact and for whom and in which context is a fiction
30. Do any countries, especially the Muslims understand the reality of terrorism?
31. If they understand then are they
I. Which country
II. To which extent
32. Will America or western block succeed in the garb of terrorism? If yes to what extend?
33. Will Muslims ever be able to contain/ counter America’s great game?
34. In future will the Muslim governments be at loggerheads with terrorist groups or will cooperate with them at any level?
35. Can they (Muslim countries and terrorist organizations) share a common goal?
36. In the conflict what are implications
37. Irrespective of agenda and objectives, known and unknown, what have been the implications for both Muslims and non-Muslims especially for Pakistan, Afghanistan and America.
38. Implications for America
39. Implications for Pakistan
I. More expenditure on defense
II. The stoppage of FDI
III. The destruction of tourism
IV. The destruction of infrastructure
V. Ruination of industry, agriculture in war hit areas
VI. Effect on trade
VII. Migration of people
VIII. Economic activity in the area
IX. Business of the people.
X. Expenditure on I.D.Ps
XI Expenditure on reconstruction and rehabilitation of people
XII. Stoppage of games: cricket and loss of revenue.
I. Health institutions
II. Educational institutions
III. Employment
IV. Poverty
V. Festivals
VI. Issue of human rights
VII. Issue of women rights
VIII. Art, architecture, literature
IX. Health activities, games etc
I. Anger
II. Frustration
III. Erosion of social relationships
IV. Mistrust in community
V. Exploitation
VI. Terror
VII. Restlessness
VIII. Nervous tension
IX. Drug abuse
X. Crimes
XI. Emotional disorder
40. Conclusion

If you need more essay outlines on your favorite topics or the topics you have to prepare an essay for then comment below and share this student article with your fellow students in Pakistan.
Facebook Twitter Telegram