MA English Classical Poetry Important Questions Notes Paper 1 are very very important to know and read them so that you can easily score highest marks in MA part 1 exams held by Punjab University. We at TaleemWala.com have arranged these M.A English Important questions notes for part 1 and literature students. 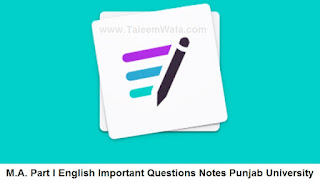 1. THE PROLOGUE BY CHAUCER

1. Explain the following extracts with reference to the context.

(a) That of hir smylyng was ful symple and coy;
Hire gretteste ooth was but by Seinte Loy;
And she was cleped Madame Eglentyne.

(b) And theron heng a brooch al with grene,
On which ther was first write a crowned A,
And after Amor Vincit Omnia.

(c) Therfore he was a prikasour aright:
Grehoundes he hadde as swift as fowel in flight;
Of prikyng and of huntyng for the hare
Was al his lust, for no cost wolde he spare.

(d) Ful wel biloved and famulier was he
With frankeleyns over al in his contree,
And eek with worthy wommen of the toun;

2. Explain the following extracts with reference to the context.

(a) Seint Julian he was in his contree.
His breed, his ale, was alweys after oon;
A bettre envyned man was nowher noon.

(b) He knew the cause of everich maladye,
Were it of hoot, or coold, or moyste, or drye,
And where they engendred, and of what homour.

(c) In al the parisshe wif ne was ther noon
That to the offrynge bifore hire sholde goon;
And if ther dide, certeyn so wrooth was she,
That she was out of alle charitee.

3. Explain the following extracts with reference to the context.

(a) For if a preest be foul, on whom we truste,
No wonder is a lewed man to ruste;
And shame it is, if a prest take keep,
A shiten shepherde and a clean sheep.

(b) He waited after no pompe and reverence,
Ne maked him a spiced conscience,
But Cristes loore and his apostles twelve
He taughte, but first he folwed it hymselve.

(d) Greet chiere made oure hoost us everichon,
And to the soper sette he us anon.
He served us with vitaille at the beste;
Strong was the wyn, and wel to drynke us leste.

9. Explain the following extracts with reference to the context.

(a) Of Man's first disobedience, and the fruit
Of that forbidden Tree, whose mortal taste
Brought death into the world, and all our woe,
With loss of Eden, till one greater Man
Restore us.

(b) Nine times the space that measures day and night
To mortal men, he with his horrid crew
Lay vanquished, rolling in the fiery gulf,
Confounded though immortal.

(c) A dungeon horrible, on all sided round,
As one great furnace flamed; yet from those flames
No light, but rather darkness visible
Served only to discover sights of woe.

(d) Regions of sorrow, doleful shades, where peace
And rest can never dwell, hope never comes
That comes to all.

10. Explain the following extracts with reference to the context.

(a) "Fallen Cherub, to be weak is miserable,
Doing or suffering: but of this be sure,
To do aught good never will be our task,
But ever to do ill our sole delight.

(b) If then his providence
Our of our evil seek to bring forth good,
Our labour must be to pervert that end,
And out of good still to find means of evil;

(c) Infernal world! and thou, profoundest Hell,
Receive they new possessor, one who brings
A mind not to be changed by place or time.

(d) Here we may reign secure, and in my choice
To reign is worth ambition, though in Hell:
Better to reign in Hell, than to serve in Heaven.

11. Explain the following extracts with reference to the context.

(a) His spear -- to equal which the tallest pine
Hewn on Norwegian hills, to be the mast
Of some great ammiral, were but a want --

(b) Thrice he assayed, and thrice, in spite of scorn,
Tears, such as Angels weep, burst forth: at last
Words interwove with sighs found out their way:

(c) O myrids of immortal Spirits! O Powers
Matchless, but with the Almighty! --and that strife
Was not inglorious, though the event was dire,
As this place testifies, and this dire change,
Hateful to utter.

(d) Space may produce new worlds; whereof so rife
There went a fame in Heaven that he ere long
Intended to create, and therein plant
A generation whom his choice regard
Should favour equal to the Sons of Heaven:


3. THE RAPE OF THE LOCK BY ALEXANDER POPE

17. Explain the following extracts with reference to the context.

(a) Sol through white curtains shot a timorous ray,
And opened those eyes that must eclipse the day:
No lap-dogs give themselves the rousing shake,
And sleepless lovers, just at twelve, awake:

(b) Know further yet: whoever fair and chaste
Rejects mankind, is by some sylph embraced.
For spirits, freed from mortal laws, with ease
Assume what sexes and what shapes they please.

(c) Oft, when the world imagine women stray,
The sylphs through mystic mazes guide their way,
Through all the giddy circle they pursue,
And old impertinence expel by new.

(d) To fifty chosen sylphs, of special note,
We trust th' important charge, the petticoat;
Oft have we known the seven-fold fence to fail,
Though stiff with hoops, and armed with ribs of whale;

18. Explain the following extracts with reference to the context.

(a) Whatever spirit, careless of his charge,
His post neglects, or leaves the fair at large,
Shall feel sharp vengeance soon o'ertake his sins,
Be stopped in vials, or transfixed with pins;

(b) O thoughtless mortals! ever blind to fate,
Too soon dejected, and to soon elate.
Sudden, these hounours shall be snatched
away,
And cursed for ever this victorious day.

(c) Then flashed the living lightning from her eyes,
And screams of horror rend the affirighted skies.
Not louder shrieks to pitying Heaven are cast,
When husbands, or when lapdogs breathe their last;

(d) For, the sad moment, when the sylphs withdrew,
And Ariel weeping from Belinda flew,
Umbirel, a dusky, melancholy sprite,
As ever sullied the fair face of light,

19. Explain the following extracts with reference to the context.

(a) Gods! shall the ravisher display your hair,
While the Fobs envy, and the Ladies stare!
Honour forbid! At whose unrivalled shrine
Ease, pleasure, virtue, all our sex resign.

(b) "For ever curs'd be this detested day,
Which snatched my best, my favourite curl away!
Happy! ah ten times happy had I been,
If Hampton-Court these eyes had never seen!

(c) What moved my mind with youthful Lords to roam?
Oh had I stayed, and said my prayers at home!
'Twas this, the morning omens seemed to tell,
Thrice from my trembling hand the patch-box fell;

(d) When those fair suns shall set, as set they must,
And all those tresses shall be laid in dust.
This lock, the Muse shall consecrate to fame,
And midst the stars inscribe Belinda's name.

25. Explain the following extracts with reference to the context.

(a) My face in thine eye, thine in mine appears,
And true plain hearts do in the faces rest;
Where can we finde two better hemispheares
Without sharpe north, without declining west?

(b) If our two loves be one, or thou and I
Love so alike that none doe slacken, none can die.

(c) Goe and catche a falling starre,
Get with child a mandrake roote,
Tell me where all past years are,
Or who cleft the devil's foot,
Teach me to heare Mermaids singing,
Or to keep off envies stinging,

(d) If yet I have not all thy love,
Dear, I shall never have it all;
I cannot breath one other sigh, to move,
Nor can intreat one other teare to fall;

26. Explain the following extracts with reference to the context.

(a) Thy beames so reverend, and strong
Why shouldst thou think?
I could eclipse and cloud them with a winke,
But that I would not lose her sight so long.

(b) She's all states, and all princes I;
Nothing else is;
Princes doe but play us; compar'd to this,
All honour's mimique, all wealth alchimie.

(c) Than by her shadow what she weares.
Of perverse sexe, where none is true but shee,
Who's therefore true, because her truth kills mee.

(d) Or let these two, themselves, not me decay;
So shall I live thy Stage, not triumph bee;
Lest thou they love and hate and mee undoe,
To let mee live, O love and hate mee too.

27. Explain the following extracts with reference to the context.

(a) As virtuous men passe mildly away,
And whisper to their soules to goe,
Whilst some of their sad friends doe say,
"Now his breath goes," and some say, "No."

(b) If they be two, they are two so
As stiffle twin compasses are two;
Thy soule, the fix'd foot, makes no show
To move, but doth, if th' other doe.

(c) And though it in the centre sit,
Yet, when the other far doth rome,
It leanes, and hearkens after it,
And growes erect, as that comes home.

(d) One short sleepe past, wee wake eternally,
And death shall be no more; Death, thou shalt die.

28. Donne As a Love Poet
29. Donne's Attitude Towards Women
30. Donne As a Metaphysical Poet
31. Use of Hyperbole and Paradox in Donne's Poetry
32. Critical Appreciation of
(i) The Sun Rising
(ii) A Valediction: Forbidding Mourning


5. POETRY OF WYATT AND SURREY

33. Explain the following lines with reference to the context.

(i) The long love that in my thought doth harbour
And in mine hert doth keep his residence,
Into my face presseth with bold pretence

(ii) If it be yea, I shall be fain;
If it be nay, friends as before;
You shall another man obtain,
And I mine own, and yours no more.

(iii) It was no dream: I lay broad waking.
But all is turned through my gentleness
Into a strange fashion of forsaking;

(iv) All is possible
Who so list believe.
Trust therefore first, and after preve,

34. Explain the following lines with reference to the context.

(i) The mean diet, no dainty fare;
Wisdom joined with simpleness;
The night discharged of all care,
Where wine the wit may not oppress:

(ii) Yet from my lord shall not my foot remove, --
Sweet is the death that taketh end by love.

(iii) And with remembrance of the greater grief,
To banish the less, I find my chief relief.

(iv) Thus, for our guilt, this jewel have we lost,
The earth his bones, the heavens possess his ghost.

35. Wyatt As the Father of Modern English Poetry
36. Thomas Wyatt as a Sonneteer
37. Critical Appreciation of

(i) The Long Love That in My Thought Doth Harbour

(ii) They Flee From Me

38. Surrey As a Sonneteer
39. Critical Appreciation of

(i) Prisoned in Windsor

40. Comparison Between Wyatt and Surrey

So, that was all about MA Part 1 Punjab University English Important Question Notes for Classical Poetry. Read them and get highest marks.
Facebook Twitter Telegram