ISLAMABAD News Desk: The Interior Ministry has announced public holiday on February 5 for the remembrance of “Kashmir Solidarity Day”, according to a notification issued on Wednesday 10th of January 2k18.

According to the official notification issued on 10th January 2018 by Interior Minister Ahsan Iqbal a public holiday is announced on February 5 (Kashmir Day) so that all the educational institutes and private and regular sectors will give an one day leave to the workers and students to be with the Kashmiris and say them that we are with them on Kashmir Day. Because of the official holiday notification all governmental, semi-governmental offices, educational institutions and universities, corporations with some private sector departments will remain closed on Kashmir day for the importance of Kashimir's nation and in remembrance of the martyrs of Occupied Kashmir.

This weekend in February is going to be a longest weekend because of Kashmir day is falling on Monday and the one day holiday is announced officially so all the govt job holders will enjoy an extended weekend and they will be free to do their things for supporting Kashmir to be a independent state or country.

History of Kashmir Day is simple as in 1990 Qazi Hussain Ahmad of Jamaat-e-Islami party has suggested 24 hours holiday and than PM Nawaz Sharif and PM Benazir Bhutto liked the idea of this non-working day to show the love from Pakistani nation to Kashmir nation. After that Pakistan People’s Party announces a public holiday on 5th of February and from that year we are celebrating this holiday with respect to the Kashmir.

You can see/read the official notification of 5th Feb holiday right below: 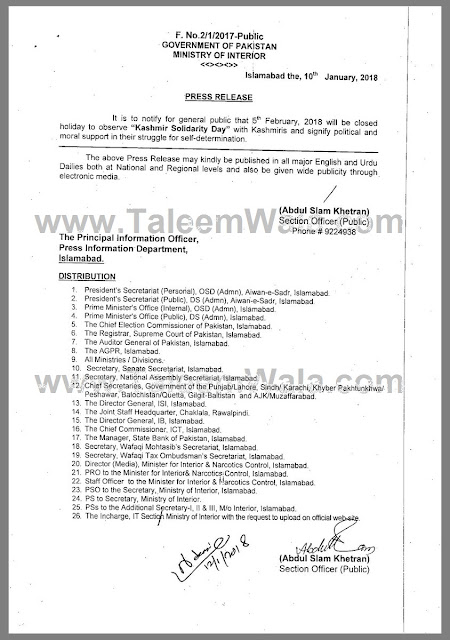 This page is about: Kashmir Day: Public Holiday Announced on February 5th in Pakistan and if you need more information about it please do comment below.
Facebook Twitter Telegram