Faisalabad Education News: As there was an hike in school and some institute fee parents of all that students who are not in favor of hike in fee have recorded a protest on Monday.

There were so many people (much of them the parents of the students) and they were holding signs with solid slogans to make education not the trade of big fishes.

Some of that slogans are: Criminals cannot teach rule of law, NO FEE TILL LOW FEE, Our kids, our money, Don’t play with the future of children and many other related lines. 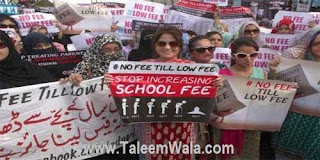 When some media persons reached to them and asked why they are protesting they unveiled that there is a not thoughtful increase in the fee of some institutes and they had said that they will raise the fee by 5% but the real raise was 25% so they are protesting against this educational trade.
Parents were worried about that they can't even afford to pay that fee per month as they are earning less and not able to make their budget look accurate.

They (Parents of Students) also suggest the high court to take a step and asked Chief justice to take sue motto notice against these institutes and their owners.

They just recorded the protest and after that they gone to their homes with peace and there is no damage because of this protest.
Facebook Twitter Telegram